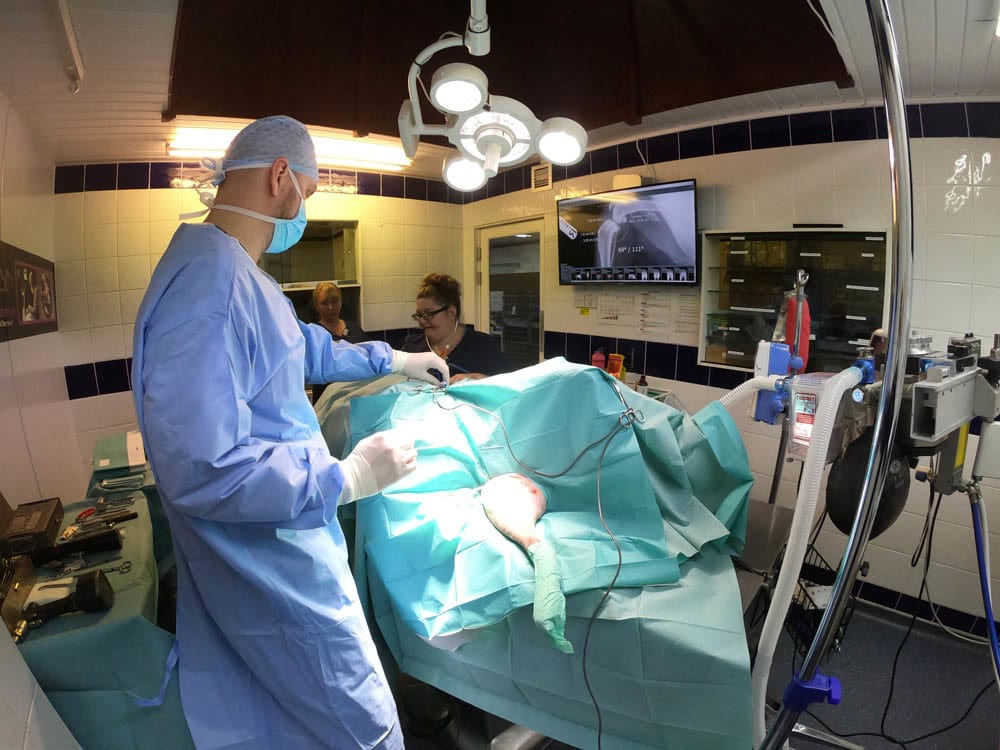 Ozzy is a lovely 11 year old Labrador retriever who normally used to chase birds in the garden and loved to run on the fields to chase the ball. One day Ozzy unfortunately when exercising became really lame and painful and was not able to walk on right hind leg. Owners of Ozzy were very worried as he is treated like a member of family and wanted the best for him so they decided to book him in for the clinical examination of the affected leg to find out what is wrong. Sadly the cruciate ligament rupture was diagnosed and different options of treatment were discussed with the owners of Ozzy. We decided to go ahead with the procedure named TPLO(Tibial plateau levelling osteotomy) – this is the procedure which provides the best clinical outcome and is considered to be the most successful one according to the current studies was of fixing the cruciate ligament rupture in dogs.

Ozzy was admitted to the hospital and had basic blood tests performed to make sure he will be a suitable candidate for anaesthetic. After evaluation of the blood results he was given a premedication and was prepared for the anaesthesia. X-rays before the surgery were taken as well as post operation. Planning to the surgery was made using the templates and measurements of the tibial plateau angle and other parameters on tibia which were vital to make the surgery successful. Sadly, on the X-rays some osteoarthritis was already noted – as many dogs with a cruciate ligament rupture develop that pathology.

Ozzys leg was clipped and prepped aseptically, transferred to the theatre and leg was disinfected again, after applying sterile drapes, surgeon set up all the equipment and decided to go ahead with the surgery as soon as the anaesthetic nurse was happy with that. Incision with a diathermy was done on mediocranial aspect of the knee, joint was inspected and bone was exposed. 3.5 mm broad plate right sided locking TPLO plate was used, screws ( locking and cortical) were placed as well as the pin to stabilise osteotomy which was made to change the Tibial plateau angle. Tissues were closed routinely and post op X-rays were performed which showed a good positioning alignment and reduction of the Tibial plateau angle.

Ozzy now will have to rest, take daily doses of antibiotics, pain relief and then when he is ready to undertake physio/hydrotherapy. The aim is that Ozzy will be pain free and will be chasing the ball again within next few weeks like he used before.